Looking for the best way to unblock websites from any location? Here’s our definitive guide to unblocking sites, apps, and services all around the web. 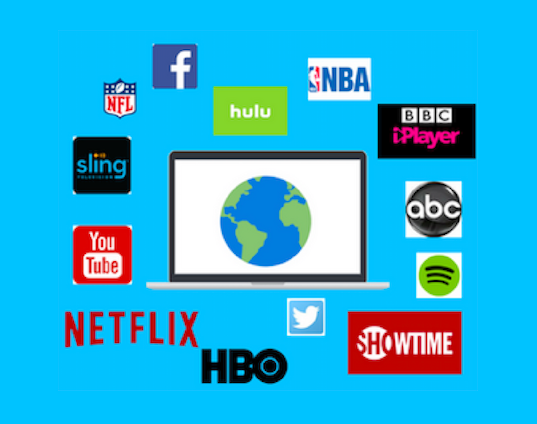 Getting blocked by your favorite sites is frustrating, inconvenient, and just plain annoying. Even as the internet has become more accessible to more people around the world, the problem of website blocks is getting worse. Whether it’s the sites themselves, your internet service provider, or your school or work, online restrictions are a pain.

You’ve probably already tried using a web proxy to unblock websites. If so, then you know this can work with some sites, but that many of the most popular sites don’t get along with proxies. Using a proxy also tends to slow your connection, and offers only minimal privacy and security. So web proxies are okay, but they’re not great.

Thankfully, there’s a much better option — a fast, easy, reliable way to instantly unblock any website, from any location. All it takes is a quality VPN.

What Is A VPN?

VPN stands for virtual private network. In the simplest terms, a VPN is an online security and privacy tool. Millions of people use VPNs to stay secure online and protect their personal information from being seen or stolen.

VPNs are very easy to use, but actually employ highly advanced technology. In fact, VPNs use the same encryption technology as banks and military organizations.

The best way to understand what a VPN is and how it works is to think of the internet as a giant super-highway. When you go online, you enter the traffic flow. You can see the content stored on websites — but the connection also goes the other way. Websites can also “see” you. Every time you use the internet, you transmit information about yourself, including your device’s IP address and your physical location.

A VPN is like a special tunnel on the internet highway. All the traffic inside the tunnel can still see out, but nobody can see in. VPNs use secure servers to achieve this. When you use a VPN, you connect to one of these servers — thereby entering the private VPN tunnel. All your personal information is encrypted and secured by your VPN. This lets you use the web privately and securely.

How Do VPNs Work To Unblock Websites?

VPNs let you unblock websites by routing your internet connection through a secure server. This bypasses geo-blocks and other restrictions.

VPNs work in a couple different ways to let you unblock websites, online services, and apps.

First, VPNs bypass geo-blocks on sites by “tricking” websites into thinking you’re located somewhere you’re not. Lots of popular sites use geo-blocking to restrict access to their content. Geo-blocking simply means you get blocked from visiting a site, or accessing certain content on it, because of your location. For example, the BBC’s website blocks users outside the UK from watching its videos and live TV streams.

When you use the internet while connected to a VPN, your personal data stays hidden. This includes where you’re located. Instead, you can choose where you want to appear to be located. VPNs have servers in hundreds of locations around the world. When you connect to a server in Canada, for example, the websites you visit will then “think” you are in Canada. This is why you can unblock geo-blocked sites with a VPN.

You might also run into firewalls or other restrictions that prevent you from using your favorite sites. For example, many schools and workplaces block sites using firewalls. ISPs are increasingly blocking customers from using some websites. Even some governments restrict citizens’ internet freedom (China is especially notorious).

VPNs let you bypass firewalls because your connection is routed through the VPNs servers, which don’t have any firewalls or blocks in your way. You can use the internet freely and anonymously, no matter where you are.

Unblock Sites With A VPN In 3 Easy Steps

Using a VPN to unblock sites is extremely easy. Even if you’ve never used a VPN before you can start using the internet freely in only a few minutes. Here’s what to do.

Follow these 3 simple steps to unblock websites with a VPN:

Why Use A VPN To Unblock Sites? 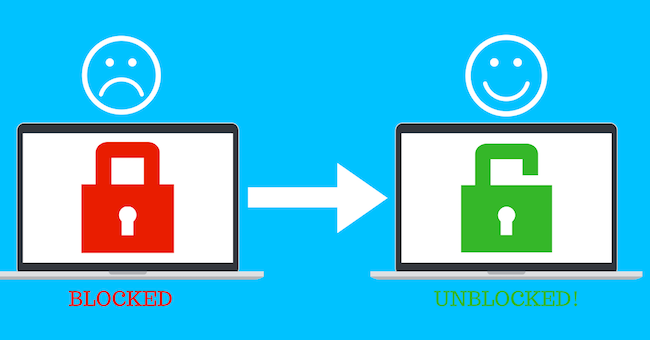 Using a VPN isn’t the only way to unblock some websites. Another option you can try is to use a web proxy. But a VPN is the best way, for a few different reasons.

First, only a VPN is advanced enough to unblock all sites and apps around the web, regardless of where you’re located. Web proxies, on the other hand, aren’t very advanced. They will let you unblock some sites, but most of the popular ones can’t be unblocked with a proxy. For example, you can only unblock US Netflix with a VPN (see the best Netflix VPNs). You also need to use a VPN to unblock TV sites and apps (check out the best VPNs for streaming).

Second, the good VPNs are super-fast and will let you stream videos and play games without slowing your connection. The same can’t be said for proxies. Even some VPNs will slow your connection and frustrate you to no end — so do your research and choose carefully (or stick with what we’ve already tested and recommend).

In addition, VPNs provide online security and privacy that proxies, or website unblockers online, do not. You may not think you need protection on the internet, but it’s no fun finding out the hard way that you do.

Other Reasons To Use A VPN

Using a VPN has other advantages besides just letting you unblock websites.

As mentioned above, one of the biggest are the privacy and security perks. You may not even realize how much your activity is monitored online, and how much websites track you. With a VPN, your entire connection is heavily encrypted and your identity is completely hidden. This prevents all kinds of snoops, spies, and other agents (including your ISP) from seeing who you are and what you’re doing.

The good VPNs also block annoying ads on websites, and prevent malware from attacking your devices. Plus, you avoid being tracked by advertisers and others online.

Have you ever noticed that your internet connection suddenly got really slow — especially when you’re trying to watch Netflix? This is your ISP (internet service provider) throttling your connection. Using a VPN prevents ISP throttling.

If you frequently travel outside the US, then a VPN will let you access all your online accounts and favorite sites while you’re abroad. VPNs are really a very handy tool!

How To Choose The Best VPN For You

There are lots of VPNs out there, and at first glance they all look pretty much the same. But there are some critical differences that can have a huge impact on your experience and your security.

One of the most important considerations for users is speed. Speeds vary a lot between VPNs. You’ll want to stay away fro the slow VPNs, or risk tearing all your hair out.

You’ll also want to look at reliability and overall performance. You obviously want a VPN that will work smoothly and flawlessly, on all your devices.

Most VPNs have servers in the major countries, but if you need to unblock content in more obscure locations then pay attention to the server selection.

In addition, consider things like customer service, compatibility with different devices, value for money, and the level of security the VPN provides.

If you need help choosing, we’ve spent countless hours testing VPNs across various metrics. Check out our list of the best VPNs for our top recommendations.

Why A VPN Is Better Than A Proxy

How To Unblock Websites On iPhone

How To Unblock TV Sites & Apps -- Stream TV From Anywhere